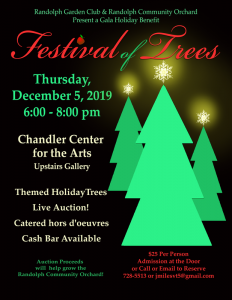 Randolph Area Garden Club teams up with Randolph Community Orchard to kick off this year’s holiday season with their sixth gala Festival of Trees, to be held in the Upper Gallery at Chandler Center for the Arts, Thursday, December 5, 2019, from 6-8 pm.

As in past years, the Festival will feature themed holiday trees, hors d’oeuvres, a cash bar, and desserts made by club members. This year the auction will be live, with Charlie McMeekin doing the honors as auctioneer. Proceeds from the auction will be donated to help grow the Community Orchard.

Holiday trees will be on display, decorated by club members and the Community Orchard. Themes will include a pollinators tree, a tree inspired by the Metropolitan Museum’s annual Neapolitan Baroque Créche tree, a kitchen garden tree filled with dried plant material and a plant-themed tree by the Community Orchard.

There will be some great auction items, such as unique art prints, Whale Tails tee shirts, a wine basket, a garden basket, an antique rocker with caning service, heirloom apple trees contributed by the Community Orchard to be picked up in the spring, and many more.

Randolph Community Orchard Inc., a 501(c)(3) non-profit organization, was formed in 2017 to create an educational public space within a landscape of tree-based perennial food production, where the public is invited to enjoy the open space, walk the land, eat the ripened fruits, and to contemplate the communal value of our working lands. Members of the Community Orchard have taught classes at local schools and hosted workshops for adults. They have planted heirloom cider apple trees, pear cider trees, heirloom eating pears, walnut and heartnut trees, and they have an off-site nursery growing future transplants.

Getting our organization off the ground has been very busy and exciting! Here are the highlights from our first year:

2. Land Purchase. In March 2019, Randolph Community Orchard Inc. purchased the conserved 22-acre parcel of land at Exit 4. We are proud to steward this land for public enjoyment and recreation while the community orchard grows.

3. Connection with the local school system.  RCO taught four classes at Randolph Technical Career Center on grafting, pruning, and the importance of perennial agriculture. In March, the students came up to the land at Exit 4 to assist with pruning apple trees. We look forward to cultivating our relationship with the school system over the years.

7. Whale Dance Installation. On 7/19/2019, Randolph Community Orchard became the host of a magnificent sculpture, Whale Dance by Jim Sardonis. This was installed with funding from the Vermont Community Foundation and the Preservation Trust of Vermont, the organization that organized the preservation of this land and holds the conservation easements. We are proud to work closely with organizations dedicated to the preservation of Vermont’s working landscape and historic down towns and are dedicated to making this land accessible and enjoyable to the public in perpetuity.

Thanks for reading about the highlights of our first year.  We are excited to continue working hard and look forward to enjoying the fruits of our labors! If you’re interested in joining the Orchard Care Club, please fill out this form.

What’s coming up: We will be launching our first fundraising event this Wednesday at the Whale Dance Party.  We hope you can join us for the party! Here is a sneak peak at the images that will be displayed on the tee shirts, designed by volunteer members of the Orchard Care Club:

The volunteers who make up Randolph Community Orchard Inc. are honored to steward a very special piece of land that is accessible to the public for enjoyment and recreation, free of charge. We are proud to work closely with organizations dedicated to the preservation of Vermont’s working landscape and historic down towns. With great excitement we share that later this week, the Preservation Trust of Vermont and the Vermont Community Foundation will be installing Whale Dance, a sculpture by Jim Sardonis on the land at Exit 4. To celebrate the installation of this beloved Randolph icon, the Preservation Trust will be hosting a party at Chandler Center for the Arts on Wednesday, July 24 from 5:00 – 7:00 pm. This party is free and open to the public and we hope you can join us!  For more info, see our event page.

When we proposed establishing an orchard on this land, we were guided by the understanding that the land was of marginal (immediate) value for hay production or tillage crops due to a recent history of neglect and likely disturbance during the construction of the adjacent Interstate 89 in the late 1960’s. Our belief in the suitability of an orchard came primarily through walking the land and observing that the hedgerows, crowded onto rocky outcroppings, were home to some three dozen young wild apple trees, some producing fruit.

We quickly found another 30-odd apple saplings and another 20-odd hawthorn saplings, which can be used as rootstock for grafting pear varieties. Without any human work or inputs, indeed through neglect, this land managed to grow nearly 100 trees on rocky outcroppings, which can now be managed and nurtured for better fruit production.

The land also has several Butternut trees, a couple of which are in good shape and producing nuts. In one spot there grows a butternut overstory producing nuts, with a taller and shorter shrub layer including native Serviceberry, and Elderberry. Again, this happened without any human intervention.

With all that growth happening on the areas that were unsuitable for even a brushhog, we predict that the soils of the open field will be even more productive.

The vast majority of fruit and nut trees do not reproduce true-to-kind from seed. That is, if you have a wonderful apple growing on an old farm and you take that apple home, extract the seeds, and plant them, those seedlings will not bear the fruit that the parent tree did. The way that a certain variety is passed down and disseminated is through grafting, that is, joining a cutting (a scion) from the desired tree to a rootstock. While there are dozens of methods and variations on forming a graft union, it all hinges on aligning the cambium (the green, living part) of the two pieces. There was originally only one tree that someone liked and called “McIntosh” or  “Wolf River” or “Hudson’s Golden Gem” and twig by twig, that variety was grafted and planted into hundreds or thousands of backyards and orchards.

In preparation for grafting season, we have been gathering scionwood from various sources. Some are heirloom varieties from abandoned orchards, some are from the hedgerows of surrounding farms, suggested by neighbors. Some are from the collections of other local enthusiasts.

Besides grafting, much work has been undertaken to release wild apple trees (ones that will be grafted onto) from competition with more vigorous trees. Left to their own, apple trees tend to produce multiple stems which compete with each other and can decrease fruit production. While there was a lot of preliminary pruning to be done, most of the trees revealed a good usable structure.

Thank you for reading. Soon, we will post about the process of gathering scionwood.  We are also working on a blog post about the history of this land and its recent conservation. Stay tuned!